It has been two weeks since my last post, and in that time so much has happened that I could not decide what to write about. I went through several drafts, scrapped each of them, and ended up staring at a blank screen– not for lack of things to write about, but rather for the fear that I would be unable to communicate the entirety of how my experience so far in Muhanga has impacted me. It has been an incredible and humbling experience, and I know that its importance will not fully sink in until I have left– however, of the many lessons I am being taught, the one that has left the biggest impression on me is learning the meaning of true service. 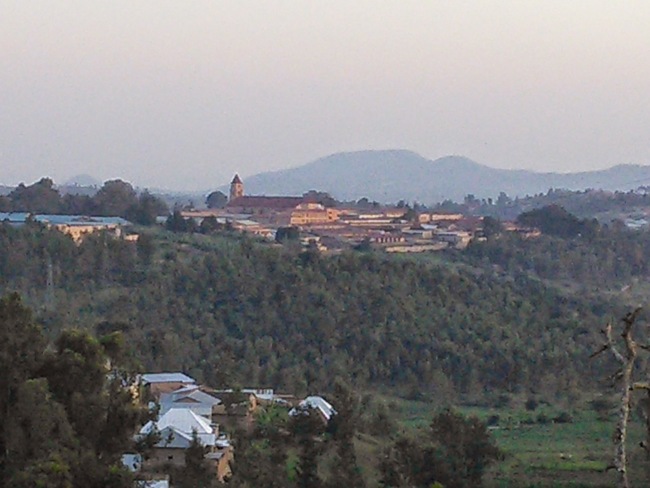 Kabgayi District Hospital, as seen on my ride to work every morning

Muhanga is a small town southwest of Kigali, in the Southern Province of Rwanda. It sits high up on a hill, high enough for the air to have a chill in the morning and evening, which makes for a very pleasant commute to work. Kabgayi District Hospital, where I am working, is a large complex of one-story buildings that sprawls about a mile or two outside of town, loosely connected by pitted concrete pathways that lead to each of the individual departments. The hospital’s size is impressive; however, its amount of medical devices is far overwhelmed by its patient capacity. For the entire maternity ward, there is one single working ultrasound machine– two are broken and require a company service contract with security codes to perform a repair– causing massive lines in the waiting rooms. In the neonatal care ward (a small room in the back of maternity), there is not enough electricity supplied by the power grid to support plugging in more than 6 infant incubators at one time, often leaving some premature children without proper incubation or care. In the emergency room, there was one single broken defibrillator. In the radiology department, there is one working stationary x-ray machine and one brand new donated machine, still sitting in its wrappers because it is not able to be used in the inconsistent power conditions of the developing world. In a storage closet in the back of the hospital, over 15 oxygen concentraters sit unused because they ran out of zeolite, an expendable mineral that can easily be replaced in the United States but is too expensive to be shipped here to Rwanda. The list can go on and on, and we continue to discover even more cases like this as our time in the hospital progresses.

My partner Robert and I began working with the maintenance department in order to begin repairing these machines and returning them to service. The maintenance department of Kabgayi is a great crew of hard-working people: Ernest, the chief of maintenance, who always ensures that we can meet with the hospital director and administrators despite their busy schedules and helps us to accomplish our agendas; Frances, our BMET contact and friend who is always interested in helping us out and has a great knack for picking up English slangs (he now greets us with “Wazzup?”); and a host of other workers who help to make our job easier and keep things running around the hospital. Working with them is a privilege; they always are positive and encouraging to us, making us feel welcomed into the working community of the hospital.

Communication, however, is quite a challenge. Rwanda has two official languages: Kinyarwanda, its mother tongue, and English, the language of commerce and education. However, Rwanda only recently switched to English in the past few years, as its original language of commerce and education was French, ever since the Belgian colonization. As you can imagine, languages are mixed and matched, and trying to get your point across can be an incredibly difficult task. For the first week, this challenge was a dominating one for my experience at the hospital; I was discouraged and frustrated when we would explain our task to people and they would nod, but not understand a word we said. It turns out that saying “no” to someone who is explaining something to you is considered rude in Rwandan culture, which can make things extremely difficult for communication. I found myself with a sour attitude, often snapping at people because of my frustration at being unable to talk, and by the end of the first week I had to take a step back and assess myself. I was ashamed of my selfish attitude, and I began praying for God to help me sort out what was going on with my frustration. After all, this was the reason I came to Rwanda! Why was I not coping with the challenge? I knew this would happen, and yet I still was struggling with it!

In a series of events, God very decisively answered my question.

The first thing that acted as a wake-up call for me was Friday of my first week here, when the hospital held a genocide memorial service for all of the hospital employees and affiliates that died during 1994. I was unsure if it would be appropriate for me to come– after all, this service would be a raw moment for people who had lost someone, and I didn’t want to intrude upon that moment with the ignorance of someone who could never understand that kind of pain. However, Ernest insisted that it would be very much appreciated if Robert and I would attend, and so we found ourselves in a large basilica outside the hospital complex, surrounded by the people we worked with every day at the hospital. They were praying, singing, and seeking, and even though I couldn’t understand the language, the intention of everyone there needed no explanation. They were seeking comfort in each other and in God, and the bond that was formed by their shared loss was so real it was almost tangible. As the congregation proceeded from the church to the memorial tombs, singing hymns in Kinyarwanda, I felt a strange tumult of emotions. I knew that I was only a visitor to this country, and that I could never fully understand what these people went through, but in that moment I shared their sorrow and their faith in a brighter future. When we reached the tombs, people began to step out and lay flowers at the site for family or friends they had lost. When the last flowers were ready to be laid, the conductor of the event turned to Robert and I and motioned for us to take the last basket and lay it at the tomb. As Robert laid the flowers down and we both bowed, I felt like I had been hit in the face with cold water. I had been so frustrated at not communicating with these people, at not being a part of their community, and yet here in one of the most vulnerable and painful moments of their lives, they brought us in without hesitation. I was shocked, and I was moved. Something about how I was approaching my work was fundamentally different from how these people were treating me. 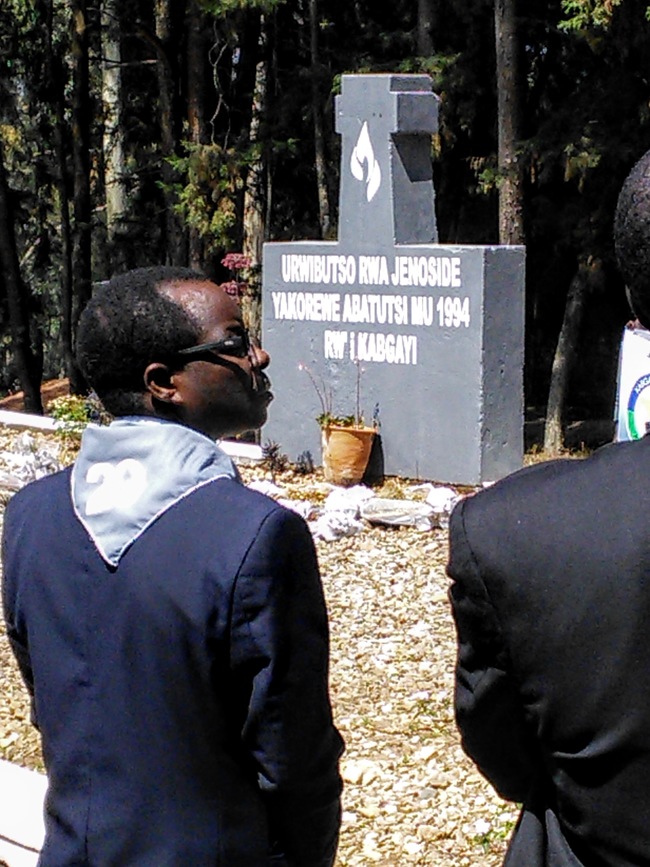 The genocide memorial grave, on site at Kabgayi Hospital

As is so often the case, however, I needed more than one reminder to truly recognize the problem I was facing. The second came midway through the second week, when we were working on an infant warmer in the neonatal care ward. We had been struggling with a difficult repair, and finally when we took the machine back to the workshop to look more intensively at it, I was tired and frustrated. In a bad mood from lack of sleep and a difficult day, I slowly worked on the warmer with a lack of conviction. After about an hour of this, there was a knock on the door of the maintenance office, and in came the chief of maternity, the person who was in charge of the neonatal ward. She walked up to us and shook our hands, thanking us for all the work we were doing for the hospital. She explained that they had a big problem with not having enough infant warmers, that many premature children would be too cold because they didn’t have enough equipment to warm all of them properly, and she thanked us for working so hard to fix this problem and return the warmers to service. I immediately felt a weight of conviction on me, and as I returned home that night, I was praying and trying to understand what was wrong with my outlook on this trip.

What I realized was that my motivation for what I was doing during this second month had gone astray. It is so easy when doing service or mission trips to fall into a pitfall, a very subtle and dangerous one: you stop doing service for the people you are serving, and start doing service for yourself. I expected a gratifying feeling, to feel fulfilled and see how my work was impacting the hospital and helping people. But the truth is that more often than not, the best help you can give doesn’t result in immediate gratification or feedback. I will not always have people patting me on the back and telling me what a good job I’m done, how great my work is, how happy they are to have me; if I am looking for that kind of praise, my service is empty and I am not really helping these people at all. It will not always be pleasant, nor easy, nor simple, but that doesn’t matter. When service stops being about others and starts being about yourself, you lose your ability to be an effective servant.

I am continually astounded by what God is doing here, and I am so grateful that I get to be a participant in it. Two weeks have already passed, and only three more remain for my partner and I to try and leave the hospital better than we found it. The challenge is difficult, but it doesn’t compare to the privilege of being in another world and having the ability to help in my own small way. I can’t wait to see what these next few weeks will bring, but even more importantly, I can’t wait to see what God will do in the lives of the people I am working with and helping– and hopefully, by the end of this trip, He will have used me to change something for the better. 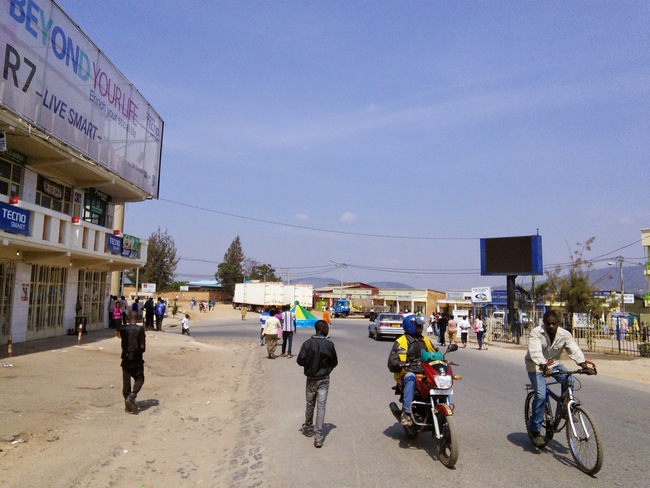 Last year upon my return from Rwanda, I made a promise to myself that I would go back. I didn’t know when or how; I only knew that God had prodded my heart and told me that my story with the Rwandan people was not yet over. Now I’m... Continue →