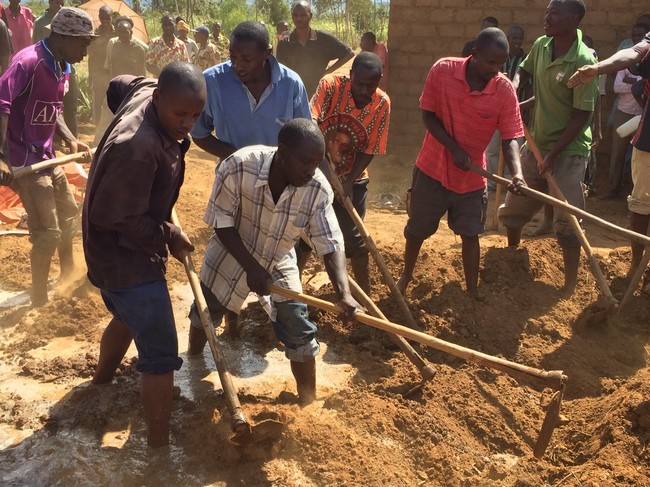 As I am learning quickly on this trip, I should never jump to conclusions about absolutes– my experience today with the Rwandan people was a powerful enough experience that I felt the need to write another post quickly on the heels of my last. Today, our group had a tour of the Millennium Village planned– however, this tour also happened to fall on the last Saturday of the month, which happens to be a nationally mandated community service day. Before I explain what happened, some background information might be in order:

The Rwandan genocide of 1994, a catastrophic event that affected virtually every family living in Rwanda today (I have yet to meet a family that did not lose a relative to this atrocity), has left a lasting mark on the country’s psyche and modern society. The genocide was fueled by hatred between the Hutus and Tutsis, the two major ethic groups of Rwanda, which lead to a government-sanctioned kill order on every Tutsi in the country. The devastating losses resulting from this genocide affected not only the Tutsis, but also the entire country, as distrust and anger built up between the two tribes. The new Rwandan government, a Tutsi-led establishment, has since promoted a policy of forgiveness and reconciliation, trying to re-establish the bond between the two ethnic groups as one people. While this is a dark part of Rwandan history, it is impossible to understand the people or the customs of this country without first understanding what caused such a radical shift in the social, political, and cultural state of Rwanda. I am continually awed by how Rwanda has recovered in the past 20 years since the genocide, as I have not once heard the phrase “Hutu” or “Tutsi” applied to anyone– every person I have met has a proud identification as a Rwandan, regardless of ethnicity.

Of the many programs the government has implemented to encourage cooperation between Hutus and Tutsis, we were able to participate in umuganda. Umuganda is a period from 8 AM - 11 AM on the last Saturday of every month, where everyone in each village is required to gather together and do community service. We arrived at a very poor outskirt of the Millennium Village, where houses made from clay bricks stood in rows and crowds of people gathered by a giant military water tanker in the blazing sun. I felt foolish and almost disrespectful as we climbed out of the van, waving around cameras and in general looking very out of place. I could see that this project was important, and I felt like I was intruding on something that wasn’t mine to understand. However, as we lined up, watched the tanker pour water into the dirt, and saw the people jump into the mud pits and begin vigorously hoeing dirt into the water in order to make mud insulation for the houses, something changed. I realized that in this moment,the only thing that made me out of place was my unwillingness to get dirty and work alongside the people of this village. After I saw one of my classmates kick off their shoes, roll up their pants, and jump in, I couldn’t say no. The next thing I know, I’m knee-deep in mud hoeing alongside the villagers who are highly entertained by these muzungus (white people) helping out. The crowds surrounding us began to cheer and clap as we all, one by one, took off our shoes and jumped into the mud pile and began working. It was in that moment that something beautiful happened: I didn’t feel like a tourist. I didn’t feel like a snotty, spoiled first-world child. I felt like I belonged. I couldn’t understand everything, and there is certainly no way I could wrap my mind around the pain that these events were driven by, but when I was working alongside these people I felt part of their community. We worked for an hour alongside the villagers, and as I was covered in dirt and laughing and hoeing and slinging mud onto the houses, I knew that it would be one of the most significant experiences I will experience in Africa. I was no longer an observer– I was a participant.

I was struggling to decide what to write my first post about, as in the five days I have been travelling I have experienced an overwhelming amount of new information and culture. Of these experiences, however, I think the most notable... Continue →