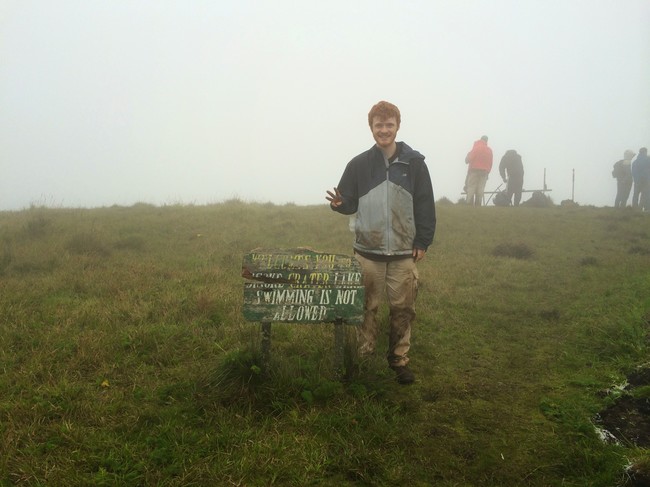 This weekend, our group planned an excursion of the more typical Rwandan tourism type: the Volcanoes National Park. This park is situated on the northern side of Rwanda, bordering the Democratic Republic of the Congo and Uganda and lined with very impressive mountains. We had expected our trip to be a hike up the mountain to a crater lake at the top of Mount Bisoke, sitting at a lofty 3,700 + meters (that’s over 12,000 feet for you non-metric folk out there). What we actually experienced was incredibly strenuous, and pretty unexpected.

Arriving at the base of the mountain around 8 AM or so, we were taken as a group by several guides up to a stone wall that signified the beginning of park territory. I should mention before I go any further that this trip was considered the most popular volcano hike– from all accounts, we expected this hike to be pretty do-able and accessible to everyone. However, there was a slight complication in our plans: it rained the previous night. When we arrived at the mountain, the path was an ankle-deep pit of mud, forcing us to fight for every step. As we made slow progress up the mountain, dense vegetation closed us in on both sides (including some really devious stinging plants that seemed to be everywhere we put our hands to catch ourselves) and a thick fog began to roll in. Constantly slogging through thick mud and fighting our way up slopes very quickly began to take its toll: I lost a shoe twice and fell on my face from a misplaced step innumerable times, and by the time we reached the first rest stop I was already battered up. We kept pressing on, but as the air thinned, the temperature dropped, and the fog turned into a misty rain, I began to feel like this hike had become a brutal endurance challenge. After four hours of pulling legs out of mud pits, clinging to stinging plants for support, and fearing we had lost the trail, finally the ground began to level and we approached the summit. As we triumphantly reached the top, we all ran to the crater to see the beautiful lake… only to find that the fog was so dense we couldn’t see anything!!!

As we finally made our way down the mountain (stumbling, falling even harder into mud, etc.) and back to camp, I realized that I felt like something was missing. Sure, the experience was great– how many times can you say you got to climb a volcano in Africa?– but I felt like the deep connection to Rwanda, the kind I felt last weekend during Umuganda, was missing. It took a couple of days of pondering and a good talk with the people I love back home to help me start to realize why that was. I realized that during tourist exhibitions like these mountain hikes, the country is put on a display designed for Americans, or Westerners in general. Visiting these tourist destinations, we received coffee, nice Jeep rides, and were treated like celebrities everywhere– but this wasn’t the real Rwanda! I kept thinking about last weekend, where I was knee-deep in mud with people from the local village. The country wasn’t being summarized and presented to me on a silver platter then; it was just real.

There’s nothing wrong with tourism trips– I’m glad I went on the one I did, as I had a great time and really enjoyed the experience. But I think the most important thing I gained from the trip was the understanding that I am looking for more than a tourist experience during my time in Rwanda. The deeper connections, the ones that introduce me to new people and ideas and ways of life, are the experiences I look forward to the most, and I know there are many more of those ahead of me. I can’t wait to see what is in store as this summer progresses!

As I am learning quickly on this trip, I should never jump to conclusions about absolutes– my experience today with the Rwandan people was a powerful enough experience that I felt the need to write another post quickly on the heels of my... Continue →